Art for Change: The Collaborator

The next in a series with The Philadelphia Citizen profiles Nia Benjamin, who makes experimental theater that’s not just experimenting on stage — it’s also experimenting with the process itself, allowing for collaboration and room to breathe.

Nia Benjamin’s passion for experimental theater is a radiating force. The co-artistic director of the Philadelphia theater company Ninth Planet knows firsthand that imagination and play are key elements to both theater making — and joyful living. This is why Benjamin focuses on creating theater pieces by and for queer and trans people and people of color. “We want to do the thing that we feel culturally, or socially, that people like us are discouraged from doing,” Benjamin explains emphatically.

What is “the thing” exactly? That is something Ninth Planet rediscovers together with every show.

Benjamin moved from West Palm Beach, Florida to attend the University of the Arts. It was here that they learned about devised theater, which would become the format Ninth Planet uses to make their productions. In devised theater, the cast and crew work together to develop a new show during the rehearsal process. While still a student, Benjamin met UArts alum Sam Tower, a longtime Philadelphia actor and fellow devised theater maker. It became immediately clear their creative journeys were meant to intertwine. Together they founded Ninth Planet in 2018.

The name of the company references the ever-changing status Pluto, the supposed ninth planet in our solar system. Just as astronomers keep looking straight into the mysterious, so does Ninth Planet. A Ninth Planet production is centered more around dance and movement rather than speech and dialogue. When it comes to telling stories around identity and belonging, Benjamin says, “I can’t put it into words, but I can feel it and I can try to recreate that feeling. I can try to share that feeling with you.”

This past September, Ninth Planet debuted their third production, High Noon. The piece, directed solely by Benjamin, was a hit at the Fringe Festival. High Noon is a dreamy piece of theater that explores Blackness and queerness through the symbolism and mythology of the American cowboy.

Like most Ninth Planet productions, High Noon took years to develop. This is a point of pride for the theater company. In the early years of Ninth Planet, Benjamin says that centering urgency and productivity was unpleasant for everyone involved. The members of Ninth Planet wondered, What would it mean to make a theater company where we tried to focus on taking care of each other as our number one priority? The result was slower making, more accountability, and a commitment to friendship.

Logan Cryer: How did Ninth Planet get started?

Nia Benjamin: I went to the University of the Arts. I was an acting major and in my senior year, a teacher of mine said, “There’s an artist you should really meet.” Sam’s a couple of years older than me and graduated [from the same acting program]. We didn’t overlap at all.

We met, had one coffee, and there was a mutual acknowledgment of … strange. From there, we were like, “Let’s just make a show!” Within a month, we were in a rehearsal room, working on Strange Tenants, which was produced under Sam’s name.

The show was really painful: There were moments that felt really hard. So we finished the show, which to this day I think was a little haunted. I’m grateful for that haunting because out of that came this realization: This is a space where we find so much joy and liberation in, so why do we feel bad all the time?

We went on a retreat — me, Sam, Jeremy Gable who wrote Strange Tenants, and Katie Croyle , an associated artist — and we asked ourselves, What would it mean to make a theater company where we tried to focus on taking care of each other as our number one priority? Out of that came this set of practices such as, it takes the time it needs to take. We are not going to get caught in the capitalists’ relevancy cycle where, if I’m not producing a show a year, I don’t really matter.

We’re going to make a process that honors each artist as a whole person and not just as a hired hand, which means that sometimes we have to adjust, adapt, accommodate different needs and that should be something we all approach with a lot of joy and excitement.

LC: How do you define Ninth Planet?

NB: Ninth Planet is an artistic experimentation think tank … Sam [Tower] and I are trained actors; we come from a very traditional theatrical language. However, before I wanted to be an actor I wanted to be a fine artist. I grew up drawing and painting and sculpting things and so did Sam. I think those natural inclinations come out in our theatrical work. We were also both exposed to a lot of really European influences, especially experimental theater makers in the physical theater realm. I think the spoken word is our least favorite thing to put on the stage and oftentimes we feel bogged down when spoken word happens in a process.

We define ourselves as a company based in Philadelphia, so a lot of what we do comes out of our experiences as people living here. I’ve been here almost a decade, currently in Southwest Philly. I feel very much of this place at this point and very changed by this place.

High Noon was our third production. We produced Homeworld, and then Honey Honey, which was going to be a live show and then became a film, and then High Noon, which is technically Ninth Planet’s first Fringe show.

LC: Were you surprised by the number of people who came out to see High Noon?

NB: Shocked is the word. I’m still not over it. We were shocked at the number of people that we didn’t know that were coming out to see the work. That was the biggest surprise. I think we have a gracious and supportive group of folks who come see our work pretty consistently, but the fact that 80 percent of the audience I didn’t know, that was shocking to me.

It’s a double-edged sword: When you make a work that is specifically about a certain community or made by a certain community, there’s always this quasi-glaze of fetishization that can bubble to the top. So, while I am so grateful at the show of support for the show, there’s this thing where I’m like, Why were you there? [Laughs]

A lot of people talked about the scale of the show. This feels exciting, because my personal priority is to give Black artists and non-White artists the opportunity to work on a large scale. I wanted to put the complicated, nuanced feelings that go into being the people that we are into a large scale [production], to let it be messy and hard to define and wordless.

The world asks of Black people, trans people, queer people, to have perfect words for who we are, why we are, or what we are. I just feel so uninterested in that because I’m like, Why do I have to define something that is just simply my essence? I can’t put it into words but I can feel it and I can try to recreate that feeling. I can try to share that feeling with you.

LC: How have your values shaped the way Ninth Planet produces work?

NB: We want to do the thing that we feel culturally, or socially, that people like us are discouraged from doing. We want to support artists that come from communities that matter to us, that we identify with. And also just to fuck up. We want a space where we can try something and it does not work. We feel a lot of joy when we try something and it doesn’t work because we’re like Heard. Learned. [Laughs]

Maybe it’s self-righteous, but this politic of this work is important just because. It’s not about any sort of final product. It’s not about the outcome or how many tickets are going to be sold. The gesture, the process of making work, is the thing, to me, that deserves funding — not the final performance. This convergence of minds and thought and energy around an idea is what deserves the money.

LC: Have you had difficulty convincing funders of that idea?

NB: Sam and I talk about this a lot. We don’t look like 95 percent of the people who run a theater company. So because of our various identities and histories of marginalization, we are asked to over-explain, to validate an inclination that we want to follow, in ways that a lot of White or male lead companies don’t have to. I don’t want to discredit their years of really hard work and artistic investigations, but there’s an inherent trust and listening ear that comes when you look a certain way.

I graduated from UArts, and I wanted to know how money gets passed between hands. So I decided to go work for a funding organization. I’m grateful for the time I spent there because I got to learn the ins and outs. That knowledge makes it so much less mysterious. It’s a game that I hate having to play, but we have to play it. I don’t have a perfect solution yet — but I’m trying to find one.

LC: What’s your advice for other DIY theater makers?

NB: First, be prepared for a very dense season of nos. The second thing is, if there are people who will give you feedback, ask for it. What they’re going to pick up on might be something that you’d never expect.

The last thing would be, talk to people who are doing it, and ask them how and why. That is what helped me and what I try to do [for others]. I realize a lot of people took a chance on me before they even really knew who or how or what I would go on to do, because they saw that I wanted to do it. That initial spark of wanting to do something is incredibly worth investing in, regardless of where you’re at in your career. 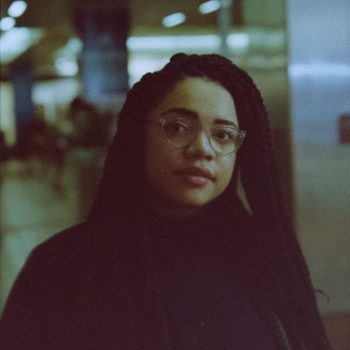 Nia Benjamin is an emerging Philadelphia artist interested in the devising of new, socio-cultural works of theatre for the representation of unheard voices, as well as creating arts education in underserved communities. They are also the Co-Artistic Director of Ninth Planet, a Philadelphia-based theater company and self-described “experimental think tank.” 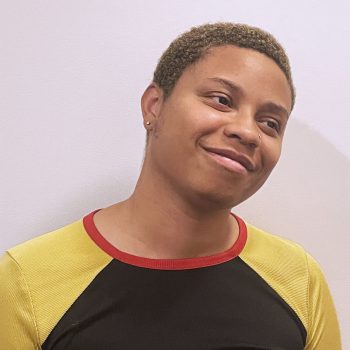 Logan Cryer is a curator based in Philadelphia with a penchant for local art histories. They are an alum of Moore College of Art & Design, where they acquired a BFA in Fine Arts and minored in Curatorial Studies. Logan attended Headlong Performance Institute in the Fall of 2017 and has orbited experimental performance and dance spaces ever since. Since 2020, Logan has been a part of Television, a service that provides low cost technology rentals to curators, activists, and organizers in Philadelphia. In 2021, Logan launched SNAIL Gallery, an online curatorial experiment. Logan is a contributor to Artblog and one of the hosts for Artblog Radio.